An ID number is a basic requirement for various online applications. There are two ways we can take advantage of ID numbers – we can verify them using their check digit to ensure that the user entered their ID number correctly, and we can extract information from them to speed up the rest of the application process. No one likes entering the same data over and over again, after all.

First off, we need to understand exactly how they work. The information available from the Department of Home Affairs is historically patchy, which has produced a range of implementations and restrictions in various blogs. The more recent ID books come with an explanation of what the ID numbers actually mean, which we can combine with what we already know to produce a reasonable approximation.

This post will examine the existing methods of producing SA ID numbers found on the web in conjunction with the ID book information and present some JavaScript functions to verify an entered ID number, to extract relevant information from that ID number and to generate new, valid ID numbers that can be used in testing.

Initial code that was used to begin this investigation can be found at Marcin Pajdzik’s post.

If you’re not interested in the methods used but just need to generate or analyse ID numbers, check the Chrome extension here.

The below won’t apply as soon as the new version is approved, but for anyone that briefly got the extension while I thought I needed an awful permission:

If you’ve come here because you’ve seen the new permissions the extension is requesting (which are alarming I concur, Chrome doesn’t allow for finer permissions in this context):

They’re so that you can insert ID numbers directly into input fields: 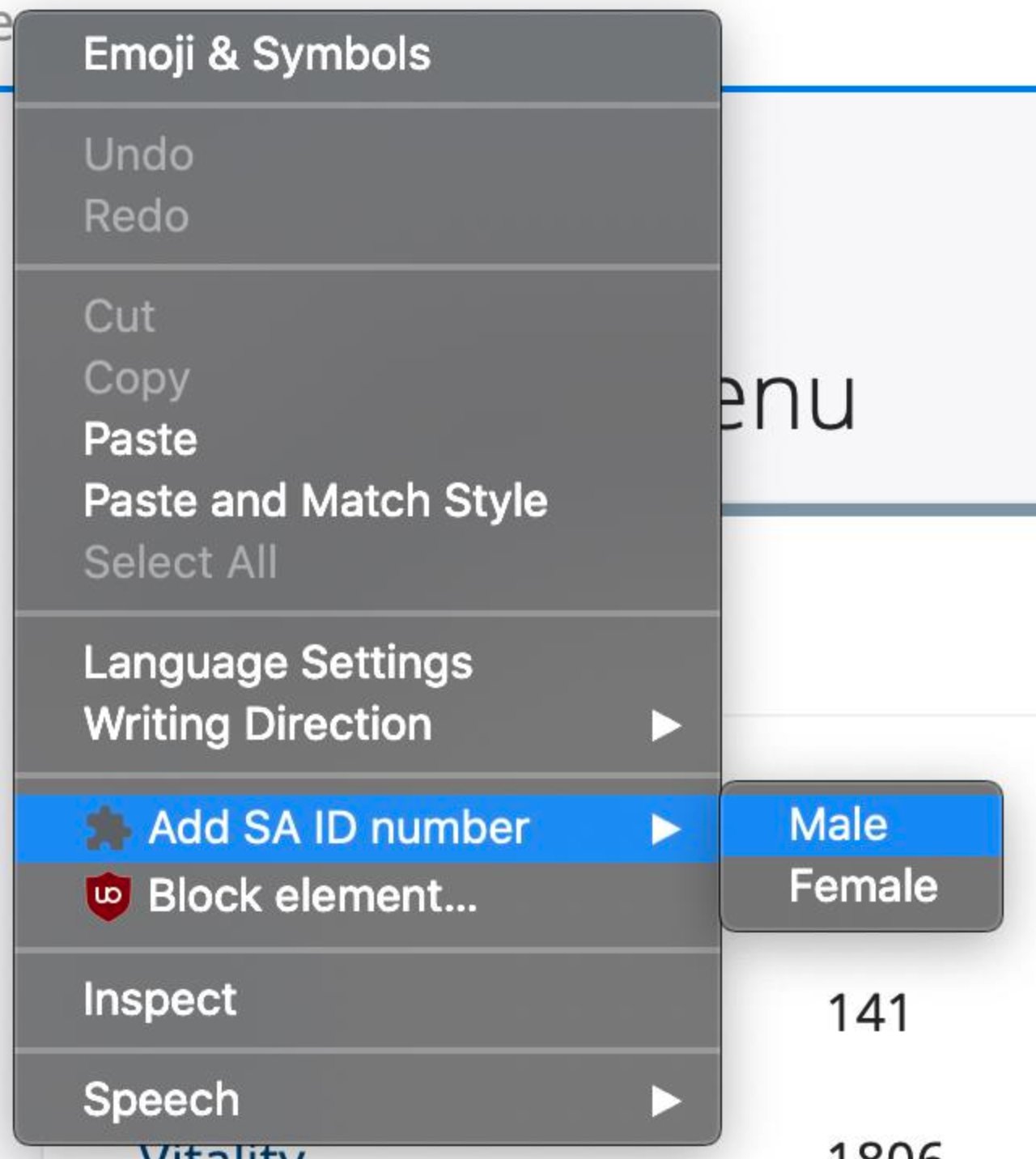 If you’re interested in looking at / extending / forking, the source is up on GitHub.

Let’s say say we have the ID number above. The information contained in the green ID books would break this down as follows.

8: “Usually 8. If yours is a 9, please ensure that you have a letter confirmation authentication of your ID document from Home Affairs.”

From this we can extract a fairly large amount of information, such as gender, citizenship, etc. The three digits following the gender code appear to be sequence digits which would obviously be needed for people who are born on the same day, so those are easy enough to generate and validate.

The option of SA citizen or non-SA citizen refers to whether the person is a citizen or a permanent resident – an ID number would not be assigned otherwise.

The digit which is flagged as usually being 8 was historically used to indicate race, but this has been dropped. This would explain why it is apparently possible to find ID numbers with values other than 8 or 9. It would seem that the 9 is also used in cases where the sequence number would have exceeded the available space.

The final check is the checksum digit which is calculated using the Luhn algorithm.

This algorithm allows for the detection of most transpositions of digits (that is, digits being swapped) as well as digits which are incorrect. There are some transpositions which it will not detect – these are given on the Wiki page. The basic idea behind the algorithm is to sum the digits in a special way, multiple the result by 9 and the take that number modulus 10 to produce the final digit. The algorithm is intended purely as a check in case of mistakes, and not as any sort of encryption or for other security purposes.

The algorithm works by summing the digits of the ID number in a special manner that allows us to detect the transposition of digits. The idea behind this is fairly simple – let’s have a look at a smaller example. Note that when the Luhn algorithm performs summing, the first digit summed is the digit on the right, however the ID numbers appear to not follow this and instead go from the left.

Say the correct number we are after is 123. One method of summing these would be to simply sum them, giving us a value of 6.  If someone was to enter a number incorrectly, say as 223, the new summed value would be 7, which would show that there had been an error. This basic approach works for the case where a single number is entered incorrectly.

Now, let’s do the same to a “mistake” combination of 213. In this case, we find that we still get a value of 6 – obviously this method will not work, as we have not detected an error in the case of transposition. What the Luhn algorithm does instead while summing the numbers is to double the value of every second digit – this gives us a sum of

for the correct number, and a value of

for the incorrect number.

If the correct number was padded with this digit, giving us a value of 1238, and the user entered 2138, we could confirm that the number entered was incorrect as the checksum digit on the end would not correspond with the calculated digit.

Now that we have a number that represents our checked number, we need to find a way to append it. The value was less than 10 in our examples above, but this will not necessarily always be the case. In addition, if you recall from earlier, our final number can be checked by resumming all of the digits and checking that we have a value that is a multiple of 10 – we need to alter our checksum digit slightly to ensure that this is the case.

Basically, we need the checksum digit to add the missing numbers to bring our sum up to a multiple of 10. So if our current value was 27 we would need our checksum digit to be 3, giving us a total value of 30.

This can be calculated in one of two ways. In the first, we can take the units portion of our number and subtract it from 10. In our previous example this would mean taking 7 and subtracting it from 10.

The other way of calculating the digit involves multiplying our sum by 9, and then taking the unit digit. In our previous example, our current value was 27. Multiplying by 9 gives us 243 – if we take the unit digit we arrive at our previous answer of 3 again. But why does this work?

Now, if we multiply

If we then add our original

back onto this value, we get

This resulting value is obviously a multiple of 10, so we’ve satisfied our original requirement by using a value of

. In this case we would produce 243 though – we obviously cannot use that as the check digit, as we would end up appending several new digits.

Instead, we use the number modulus 10 – that is,

. The reason why we can use just this value is fairly simple – we are trying to get a number that is a multiple of 10. To do this, we obviously need to add on a value that is less than 10 as we need to increase the unit column. This means that the unit column is the only column that is important in this equation, so we can drop the other columns. This is equivalent to taking the number modulus 10, and gives us our final formula of

Now that we understand how the Luhn algorithm works, we can use it to validate our ID number as well as to produce a valid checksum digit for new ID numbers.

To be thorough, you can perform some basic date checks as well – see the Java code for an example of this. We can check that the month falls in a valid range (1-12) and that the day given for that month is not more than the number of days in the month.

Let’s take a look at some JavaScript to extract information from an ID number.

Now that we know how the ID number is formed, we can extract various pieces of information from it. To recap, we can obtain

Let’s put together some code to extract this info – first off, validating the ID number using the Luhn algorithm above. By the end of this, we will have a function that will return an object containing information on the ID number.

Is the ID valid – the Luhn Algorithm in Code

This code is exactly what was discussed before – we loop through our string, starting on the right hand side. We keep a running count of how many numbers we’ve added, which allows us to determine which numbers should be doubled. At each step we set our current multiple to be the count’s modulus plus 1 – this just means we alternate between 1 and 2. The +inputString[i] portion is shorthand for converting a string to a number. If the value calculated is higher than 10, we sum the digits seperately by adding the division by 10 and the modulus by 10 .

Finally, we multiple the total by 9 and get the value modulus 10 for our final digit.

We can use this to check if an ID number is valid by recalculating the checksum.

To do this, we extract the first part of the ID number using .substring() , then regenerate the Luhn digit based on that and check that it matches our ID number’s final digit.

Let’s quickly create our main function so that we can begin returning this information. This time we will include all functions we’ve seen so far, but going forwards we’ll just include the new functions. A complete listing will be provided at the end.

Running the extractFromID function on a string containing an ID number will produce an object containing one property valid , which will indicate if the number is valid or not.

The birthdate would seem like one of the easiest values to extract directly, although we have one potential cause of trouble. The birthdate is stored in the format of YYMMDD, meaning that we cannot be entirely certain of the year – that is, does 13 mean 1913 or 2013? It is likely, however, that if the year given is less than our current year (in the units / tens columns) that the year refers to a year after 2000.

The gender can be extracted directly, by checking if the 7th digit is below 5 (female) or 5 and above (male).

In a similar manner, you can extract the citizenship from the 11th digit – 0 for South African citizen, 1 for a permanent resident.

Here’s the complete code for extracting info from the ID number.

Generating an ID number is fairly simple given what we know – we just need to convert from some convenient input into the numbers above.

We do some basic validation to check the date of birth string – this will most likely be fine for testing purposes. Next we get a random number between 0 and 4 for female and 5 and 9 for male.

To get our citizenship number, we use the !  shorthand to convert citizen to a boolean value, then the +  shorthand to convert that value to a number. We get 3 random digits, pad them if they have leading 0’s (thanks Sarkos) then combine what we have. This code generates numbers as suggested in the ID book spec, although this could be tweaked, so we add an 8.

Finally, we add the Luhn check digit and return our valid ID number.

As per request, here’s the Java implementation of the code to validate ID numbers. There’s a static method  extractInformation that takes in the String version of the ID number and returns an  IDNumberDetails object containing the information on that number.

We’ve had a look at the structure of an ID number and what the various pieces mean. We also examined the means by which you can calculate the check digit and the algorithm which it (almost) follows, along with JavaScript code for all of the above.

Don’t forget about the handy Chrome extension, and feel free to leave comments with improvements or questions.

Thanks for reading guys!